Summer is here, and people like me are attracted to those empty spots on the map that indicate an arid desert region. Always take lots of water along, and never depend on being able to find it! But it’s a really good idea to know where to look for water in the event of an emergency. Here are some tips for finding water in the desert  from survival expert Peter Kummerfeldt. – Leon 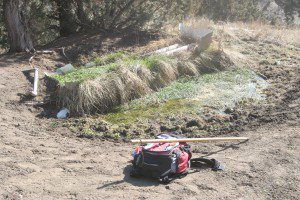 This spring in the Central Oregon high desert is the only water for miles around. The vegetation around it makes the site easy to spot.

Throughout much of North America, water is usually available and easily obtained from open sources such as lakes, ponds, rivers and streams. Fundamental to finding water is understanding that it will always seek the lowest level possible. If water is present, some form of vegetation will probably show its presence.

A good strategy for locating water is to  find a vantage point from which you can scan the surrounding countryside. Slowly and methodically, search for any water indicators such as green vegetation, birds flocking to specific areas, trails left by both domestic and wild animals, and even large rock formations from which springs may originate or where water becomes trapped. Man–made sources of water such as windmills, tanks, dams and irrigation canals might also be observed.

Look for water in low lying areas, such as depressions, sinks, or tanks, where rainfall or melting snow is likely to collect. Water can often be found in these areas long after the last precipitation, especially if they are shaded. A pair of binoculars can save you a lot of walking!

Don’t risk your life trying to climb or reach the water’s edge when safer strategies can be used. Tie a line to a water bottle or other container and throw it or lower it into the water from a safe vantage point. Since many water containers do not come with a reliable attachment point when the container is uncapped, make one by duct taping a loop of parachute cord or other line to the side of the water container.

Do not use the retaining strap that connects the cap to the water bottle. Sometimes this strap will pull free from the full bottle as it is being retrieved from the water source. The  result could be a lost bottle.

Water in some lakes, particularly many found in the western United States, contain high concentrations of calcium carbonate and calcium bicarbonate in solution which makes the water non-potable. Lakes of this nature are usually easily identified because the calcium salts leached from the soil form deposits of white powder around the perimeter of the lake as the water evaporates. Water containing high concentrations of calcium carbonate and bicarbonate taste terrible and should not be consumed!

The water quantity produced by seeps and springs varies tremendously. In some situations the amount will be only a 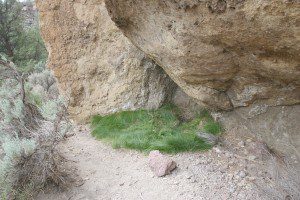 The green grass in the middle of an arid area is an indicator that water might be present. This seep doesn’t produce much water, but every little bit helps!

few teaspoons per hour. In other cases, gallons of water can flow from the ground in minutes. Where the quantities are small, the flat edge of the mouth on a plastic bag can be used to scoop up the water from a shallow source, or if it is flowing, to collect the water as it runs into the bag. (editor’s note: This is one reason I always carry a cup or wide mouth container!) A short piece of vinyl aquarium hose also works well for sucking up water from shallow collections or to recover water from narrow cracks in the rocks.

Following rain, water collects in low lying areas and may be found long after the last storms have passed through the area. Check out any depressions, sinks or other low places where water could gather. Water sources like these should be checked carefully since they are frequently contaminated with debris that has been washed into the drainage.

Finding the remains of animals that have died nearby or in the water and other similar contaminants will necessitate boiling the water, the use of halogens (iodine or chlorine) or the use of a mechanical pump to purify it.

It may be possible to locate abandoned open wells from which water may be obtained. Commonly the rope and bucket typically used to lift water from these wells will be missing and a person will have to improvise a means to lower a container down into the well to retrieve the water. Lacking a container a clothing item can serve as a sponge when lowered into the water. Windmills that could provide a ready source of water are a common sight across North America especially where little surface water exists. Commonly the water pumped to the surface is collected in a nearby tank or pumped directly into a trough from which livestock can drink. Where an open source is not available it may be necessary to dismantle or damage the piping associated with the windmill to gain access to the water. Without tools, this may not be possible. 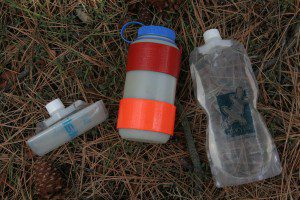 The Nalgene bottle, center, has a piece of parachute cord secured with duct tape. This would allow the bottle to be tied to a rope and lowered into a pool. The nalgene is flanked by two soft, roll-up water containers.

In arid areas, particularly in the western and south-western United States, rainwater collectors called “guzzlers” may be found. These are designed to gather precipitation and feed it into a holding tank where it remains until it is either consumed by thirsty animals or eventually evaporates.

Rain water can be easily collected using a sheet of plastic or similar material. Water collects on the upper surfaces of any material (it doesn’t have to be waterproof) and drains to the lowest point where it is collected.

Even though water is not visible on the surface of the ground, it may still be present in the soil in sufficient quantity to be collected. Locate low lying areas where water is most likely to have accumulated and dig down until damp layers of soil are found. Over time, water may seep into the hole where it can be collected.

If no indicators of sub-surface water are present, dig a hole in the outside bend of a dry river bed. Look for a location where the centrifugal force of flowing water has eroded the outer bend of a river bank creating a depression where the last remnants of water flowing downriver will have accumulated.

A person’s ability to collect water trapped by plants, or contained within plants can be a valuable aide to combating dehydration. Once again, a line must be drawn between methods that are practical and those that are more survival legend than fact!

Barrel cacti for example, long featured in survival literature as a source of water in arid regions, should not be utilized. The quantity of fluid that can be extracted from a barrel cactus is very limited and the fluid that is obtained is not beneficial and may in fact be detrimental to your health!

Water: Use Desert Survival Skills to Get Drinking Water During Floods

RESOURCES: Finding Water In The Wilderness

Tips: Effective Methods of Carrying Water In Your Survival Kit