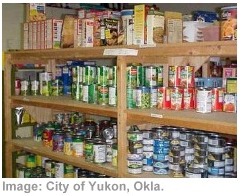 Individuals are more likely to prepare for disasters if they see their peers doing so, finds a new study that concludes peer-awareness has a stronger effect on preparedness than other variables, even having children at home.

Since 9/11, the federal government has launched initiatives such as ready.gov that encourage individuals and families to stockpile supplies and devise an emergency plan. Surveys in recent years have found that only a minority of the population has followed through on the recommendations.

The study’s authors, a group of researchers with the Veterans Emergency Management Evaluation Center and public health professors from the University of California-Los Angeles, examined data from the 2008 version of the General Social Survey, which included questions about responses to terrorist attacks.

The study, published in the academic journal Safety Science, finds that preparedness is more likely among individuals who say they became more vigilant about their surroundings after 9/11, who are aware of their peers’ preparedness actions, and who perceive preparedness to be effective.

Of those factors, perceived effectiveness has the weakest relationship with preparedness. “Perceived effectiveness may not be as critical to determining preparedness behavior as previously thought,” the study says. That means initiatives that try to highlight the post-disaster efficacy of being prepared beforehand may not be the best way to prod citizens to take action.

“On the other hand, if those who are undertaking preparedness actions remain unconvinced of their effectiveness, this may reflect a compliance-only dynamic that may not sustain behavior if costs or inconvenience increase,” the study notes.

Past research has found ties between preparedness and certain demographic characteristics, but the study says those associations are weaker, and that demographics only have an indirect effect on preparedness, whereas peer awareness has a direct effect.

Preparedness is correlated with higher socioeconomic status, having children at home, being a woman and being older.

For more:
– go to the study, “Responding to risk: Awareness and action after the September 11, 2001 terrorist attacks” (sub. req.)

PREP: Disaster Preparedness For the Rest of Us: Disaster prep self-test