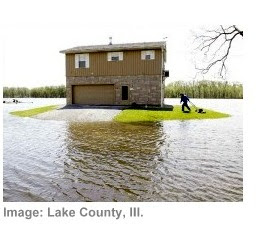 The United States faces a “resilience gap” with the potential to disrupt the American economy with long-term consequences, an insurance firm official, who also urged Congress to prioritize investments in resilience over disaster response, told a Senate panel Feb. 12.

That upward trend still holds even disregarding 2005, which was an outlier year of highly destructive hurricanes – Katrina, Rita, and Wilma – Patton said.

“Currently in the United States, many privately and publicly held assets, from homes to critical infrastructure, are not sufficiently ‘resilient’ to withstand extreme weather events,” Patton said in her written testimony (.pdf).

Analysis by the Business Continuity Institute, a professional organization Patton cited in her testimony, has found that about 40 percent of businesses impacted by extreme events for extended periods of time – such as hurricanes – never recover. Extreme weather is the cause behind 45 percent of supply chain disruptions as well, Patton said the BCI has found.

“Resilience” has been a new watchword at the Homeland Security Department – a term in increasing circulation since 2009 and generally held, despite some inherent slipperiness in its definition, to mean the ability to prepare and plan for, absorb, recover from and more successfully adapt to adverse events.

A 2010 paper (.pdf) by a Temple University risk management academic concluded that the federal government’s share of unfunded disaster response costs for weather-related disasters could grow to between $1.2 and $7.1 trillion over the next 75 years.

Even an estimate at the lower end amounting to $20 billion annually is far higher than the annual appropriations for the disaster relief fund managed by the Federal Emergency Management Agency, noted paper author J. David Cummins. The most recent FEMA spending bill appropriated $6.2 billion for the fund.

“From a practical perspective, funding resilience is a fundamentally wiser investment than spending on disaster relief and recovery,” Patton said.

One way to do so, she added, would be to expand a Homeland Security Department pilot project called Resilience Star that’s based on the same logic as Energy Star certification. Resilience Star seeks to certify houses and facilities built to withstand damage based on incorporation of certain standards and third party verification.

“What we’re seeing is that a lot of builders are interested in this because they see a market advantage,” said David Heyman, DHS assistant secretary of policy, during the hearing. The department’s plan is to ultimately extend the program into critical infrastructure construction, he said. Insurers have also expressed interest, he added, since they see a way to reduce future damage claims.

Asked why, if there’s private sector interest, that the private sector shouldn’t develop the certification without government involvement, Heyman told the committee that the insurance market is fractured across states.

“One of the benefits that the federal government can bring is a national perspective, which is not something any individual insurance company can do,” he said.

For more:
– go to the hearing webpage (prepared testimony and archived webcast available)

Read more of this article and find other worthy stories here at fiercehomelandsecurity.com