Some useful, very basic, recipes should be included any prepper/survival/ Bug Out backpack. It’s one thing to have staples, such as flour, but another to be able to consume them. And you need some very simple recipes for those times when you might only have a few ingredients. 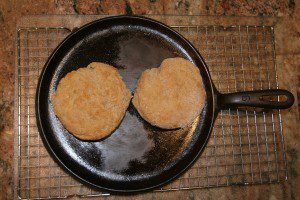 It only took the addition of some other grains to make this basic bannock survival ration into a tasty, nutritious food.

After posting some emergency survival recipes for flour last week, I whipped up some bannock to make sandwiches for a spur-of-the-moment hike.

Sitting in the shadow of Monkey Face, in Central Oregon’s magnificent Smith Rock State Park, eating my delicious bannock and turkey sandwich, I thought about how happy I was to be there!  (The trail across the top of the rock formations is the appropriately-named “Misery Trail” and I’d had a knee replacement in September, 2009!) It also occurred to me, how easy it would be to tweak the bannock recipe to make it more healthy and nutritious.

Bannock is the traditional bread of Canada and the Northwest. Native people had no access to wheat  flour prior to the arrival of European traders, although some flour substitutes existed, like wild turnips or corn, dried and ground to a powder.

Bannock actually originated in Scotland. Because bannock could be quickly prepared from readily-available ingredients, and because these ingredients lasted a long time without spoiling, bannock became a staple of European fur traders and subsequently, the native people also.

But the original recipe is nothing but flour and water, and traditional bannock is  essentially frontier junk food.

Start by amending the  flour. Basic, white, bleached all-purpose flour has virtually all the nutrients taken out of it in processing. To each cup of white flour, add one tablespoon of soy flour, a tablespoon of dried milk and a teaspoon of wheat germ. According to “Classic Sourdoughs: A Home Baker’s Handbook” by Ed Wood, such an amendment combines enzymes and creates a complete protein, similar to meat.

I’ve used this amendment for years, and you can’t taste the difference in the baked goods. Try amending the flour in all your survival recipes that use white flour, such as hardtack, and you’ll feel the difference.  Here is the traditional bannock recipe:

Stir ingredients together; stir in water to make dough moist. Knead dough until smooth. Place in greased cast iron skillet or Dutch oven over the campfire or on coals and bake about five to 10 minutes until the top is brown. Then turn the bread and brown the other side.

A handy way to prepare for a backpacking or hiking trip is to mix all the dry ingredients in a Ziplock bag. Just add 1/2 cup of water and knead in the bag. Then take out the dough, finish kneading and spread it in the pan.

(Practice baking the bannock by the campfire. Put the dough in a greased skillet, and place it near the campfire, propped at about a 60-degree angle with a stick.  Lodge Pro-Logic 10″ Skillet Preseasond.

When the side nearest the fire browns, flip the bread and brown the other side. In a pinch you could bake it on a plank!)

Pace all the above ingredients in a one cup measure and add enough unbleached bread flour to make one cup of dry ingredients in volume.  Add  2 Tbs powdered skim milk, and stir until thoroughly mixed.

Add enough moisture to make a moist dough, and knead until smooth. Place in a greased cast iron skillet and bake. If you’re making this inside, bake at 425 degrees for about 20 minutes.

With either recipe, bannock is a quick, easy way to make use of wheat flour. Both recipes are good survival tools that could prove to be really useful in your survival kit!

Tips: Hardtack – A Great, Cheap Addition to Your Survival Gear

SURVIVAL: How to make and carry a survival hydration system